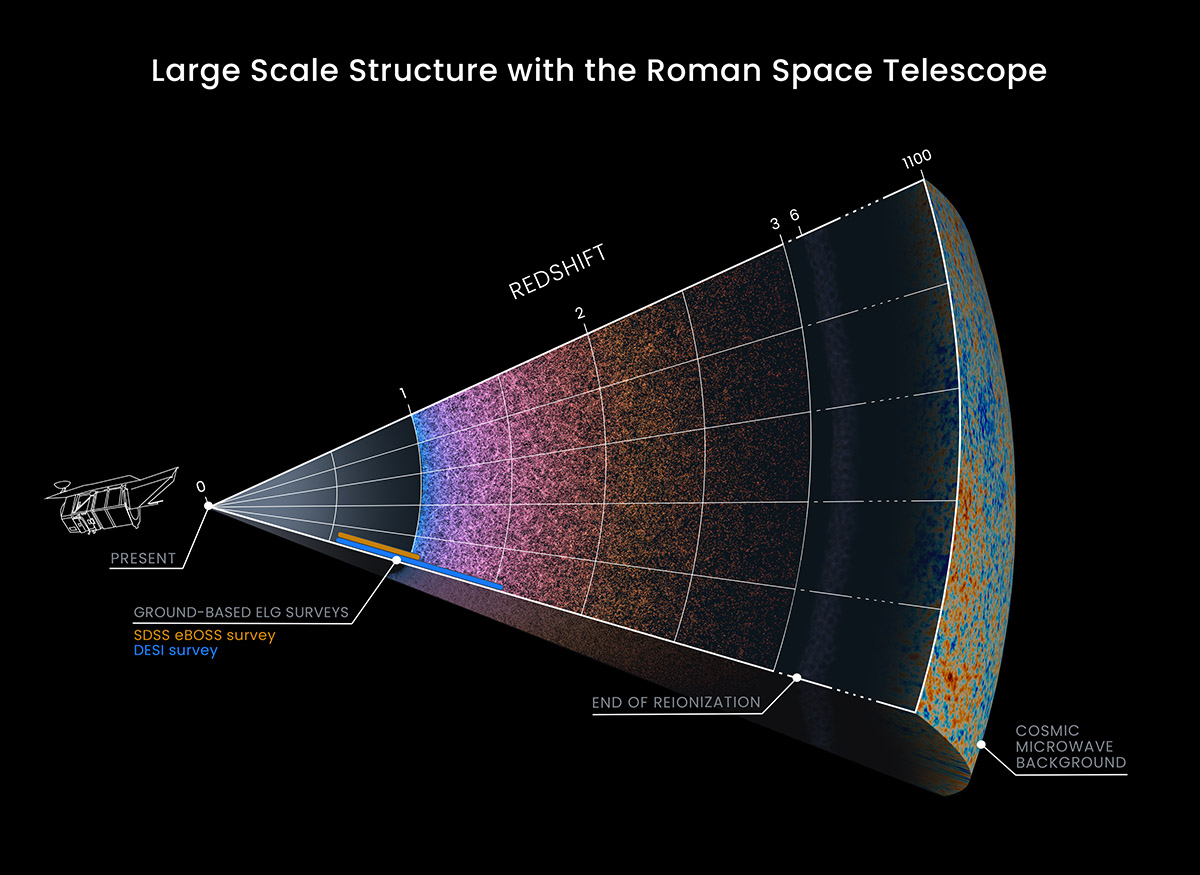 Measuring redshifts of tens of millions of galaxies

The spectroscopic component of the High Latitude Wide Area Survey measures redshifts of tens of millions of galaxies via grism spectroscopy using the WFI over at least a 1700 deg2 region that overlaps the region. Download Hi-res

The observing program described below is an example of a possible survey design. The actual survey will be defined by a future community process.

The imaging component of the High Latitude Wide Area Survey enables weak lensing (WL) shape measurements of hundreds of millions of galaxies, which yields precise measurements of matter clustering through measurements of cosmic shear, galaxy- galaxy lensing, and the abundance and mass profiles of galaxy clusters. The images at least 1700 deg2 in 4 NIR bands (F106, F129, F158, F184) spanning the range from 0.93-2.00 μm to magnitudes 25.8-26.7 AB (band-dependent) and reaching the diffraction limit in F129 and redder bands. A dithering strategy is provided to account for regions of the survey that are missed as a result of either the small gaps between adjacent WFI focal plane detectors, cosmic rays, or detector array defects. The usage of up to 4 dither positions at each of two telescope roll angles (orient) over the survey enables excellent reconstruction of image shapes, and shape measurements in several NIR bands, and enables cross-correlation analyses that can test for and diagnose systematic effects while simultaneously adding statistical power. The notional science exposure duration for all observations is ~146 sec and based upon values which yield the largest number of source galaxies in a given exposure time, and values based on the knee in the curve for detector read noise and sky background noise (S/N ratio). 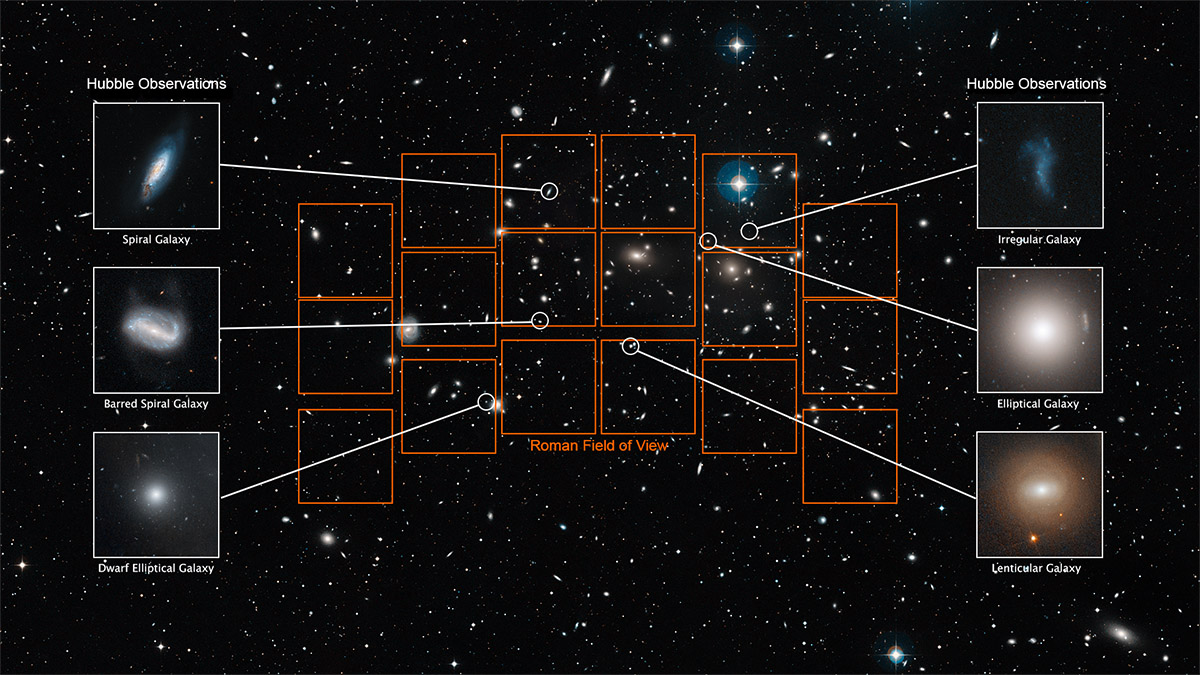 The spectroscopic component of the High Latitude Wide Area Survey measures redshifts of tens of millions of galaxies via grism spectroscopy using the WFI over at least a 1700 deg2 region that overlaps the region. Measurements of galaxy positions and redshifts in 3-dimensional maps pin down the cosmic distance scale and expansion rate at lookback times of 8–11 billion years (corresponding redshift values of z = 1-3), while measurements of galaxy positions in redshift space determine the growth rate of matter clustering over the same period. The high sampling density of the galaxy redshift survey enables studies that divide the galaxies into populations with different clustering properties, allowing consistency checks across these populations. It incorporates slitless (grism) spectroscopy to map the distribution of emission line galaxies, where the primary target is H-alpha (0.6563 um) at 0.53 at redshifts 0.53 < z < 1.88 and the secondary target is O-III (0.5007 um) up to z=2.77. A strategy of 2 dither positions at four telescope roll angles is provided to account for exposures that are lost to gaps between the adjacent WFI focal plane detectors, cosmic rays, or detector array defects. The notional science exposure duration for all observations using the grism is ~322 sec.

The Design Reference Mission (DRM) concept for the High Latitude Wide Area Survey consists of tiles and sectors. A tile approximately corresponds to a single Wide Field Instrument (WFI) field of view, but includes multiple exposures separated by short (~ 3 arcminute) gap-filling slews to cover the gaps between the individual H4RG-10 detectors in the focal plane array. (There are three exposures in a tile for F106, F158, and F184; four exposures per tile for F129; and two exposures per tile for the grism.). A sector is a larger mosaic consisting of multiple tiles-- specifically,in the current DRM, 32 times in an 8x4 layout.

A sector with 32 tiles is about 11 square degrees.

Because element wheel moves are a limited resource for the Roman WFI, the DRM plan is to complete an entire sector in one filter or the grism before moving the element wheel. 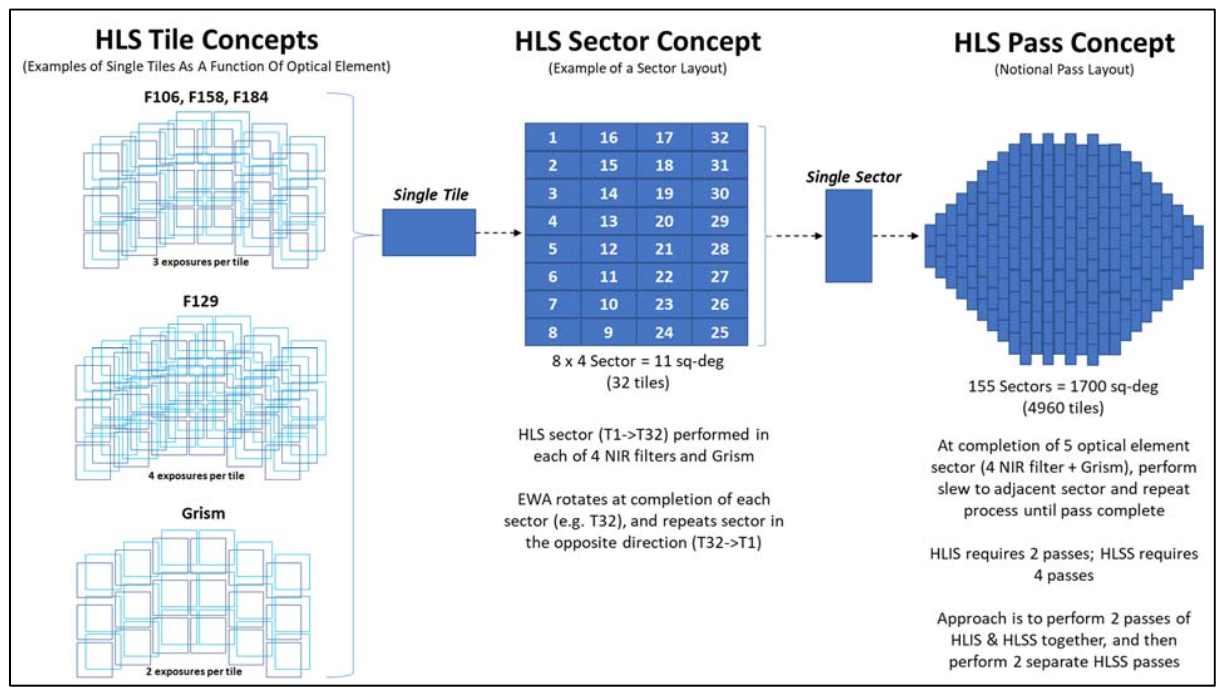