The vast majority of known exoplanets are exotic compared to the ones in our solar system. Scientists expect Roman’s surveys to find some wild worlds too, but it will specialize in finding planets in the habitable zone of their star and farther out, including analogs to nearly every planet in our solar system.

The Roman surveys will search for planets toward the center of our Milky Way galaxy, which is heavily populated with stars. The higher density of stars will yield more microlensing events, including those that reveal exoplanets.

Gravitational lensing is an observational effect that occurs because the presence of mass warps the fabric of space-time, sort of like the dent a bowling ball makes when set on a trampoline. The effect is extreme around very massive objects, like black holes and entire galaxies. But even stars and planets cause a detectable degree of warping, called microlensing.

Here’s how it works. Light travels in a straight line, but if space-time is bent – which happens near something massive, like a star – light follows the curve. Any time two stars align closely from our vantage point, light from the more distant star curves as it travels through the warped space-time around the nearer star.

If the alignment is especially close, the nearer star acts like a natural cosmic lens, magnifying light from the background star. Planets orbiting the lens star can produce a similar effect on a smaller scale.

The techniques commonly used to find other worlds are biased toward planets that tend to be very different from those in our solar system. The transit method, for example, is best at finding sub-Neptune-like planets that have orbits much smaller than Mercury’s. For a solar system like our own, transit studies could miss every planet.

Roman’s Galactic Bulge Time Domain Survey will help us find analogs to every planet in our solar system except Mercury, whose small orbit and low mass combine to put it beyond the mission’s reach. Roman will find planets that are the mass of Earth and even smaller – perhaps even large moons, like Jupiter’s moon Ganymede.

Roman will find planets in other poorly studied categories, too. Microlensing is best suited to finding worlds from the habitable zone of their star and farther out. This includes ice giants, like Uranus and Neptune in our solar system. While ice giants are a minority in our solar system, a 2016 study indicated that they may be the most common kind of planet throughout the galaxy. Roman will put that theory to the test and help us get a better understanding of which planetary characteristics are most prevalent.

From brown dwarfs to black holes 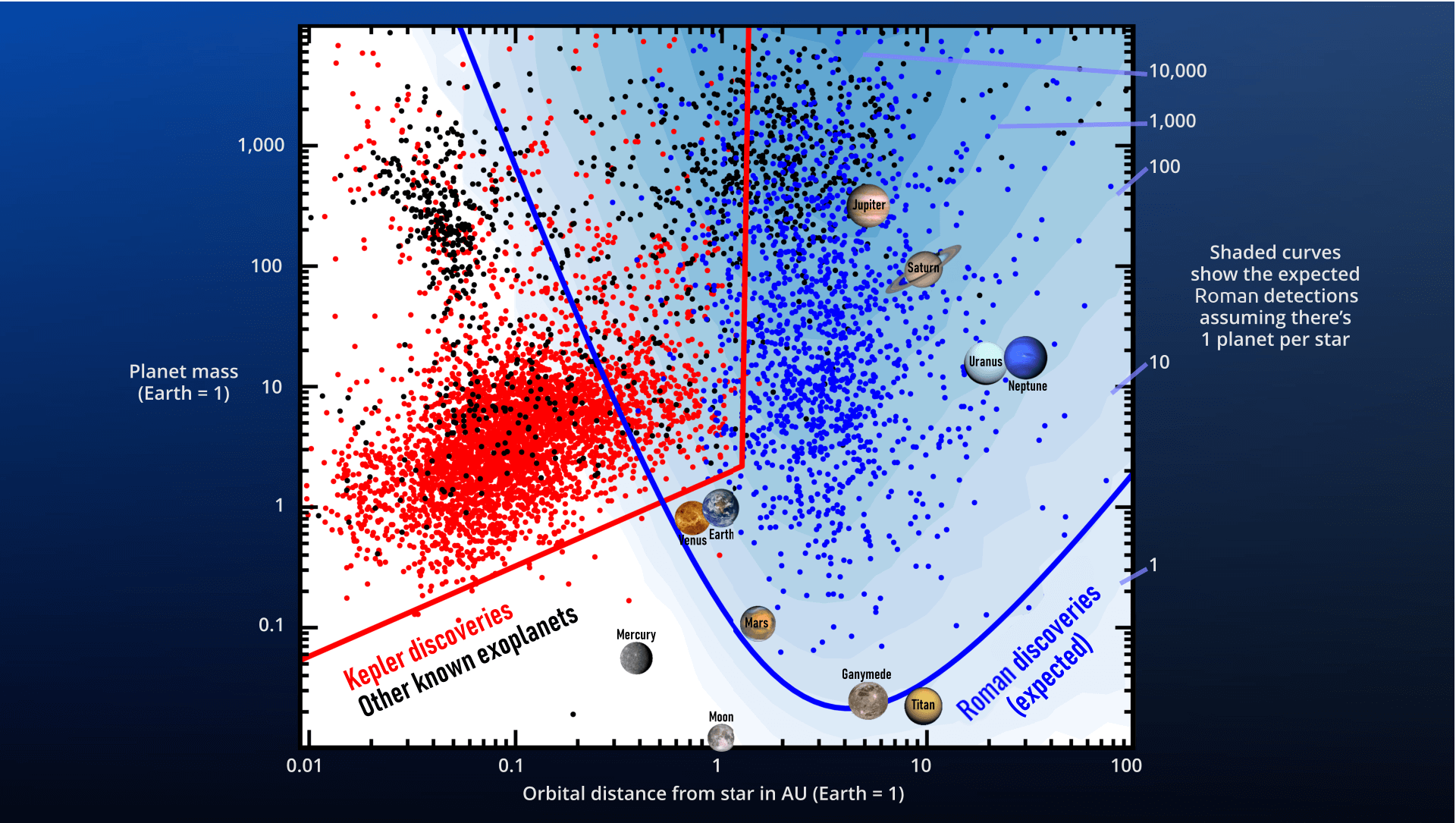 Kepler and other exoplanet search efforts have discovered thousands of large planets with small orbits, represented by the red and black dots on this chart. Roman will find planets with a much wider range of masses orbiting farther from their host star, shown by the blue dots.

Roman will reveal more than just exoplanets – it will also pinpoint hundreds of other bizarre and interesting cosmic objects. Scientists will be able to study free-floating bodies with masses ranging from that of Mars to 100 times the Sun’s.

The low end of the mass range includes planets that were ejected from their host stars and now roam the galaxy solo as rogue planets. Next are brown dwarfs, which are too massive to be characterized as planets but not quite massive enough to power themselves by fusion like stars do. Brown dwarfs don’t shine visibly like stars, but Roman will be able to study them in infrared light through the heat left over from their formation.

Objects at the higher end include stellar corpses – neutron stars and black holes – left behind when massive stars exhaust their fuel. Astronomers think there should be about 100 million stellar-mass black holes in our galaxy, but we’ve never unambiguously found one that’s on its own since they’re invisible. Since Roman’s survey relies on an object’s mass for detection, the mission will help us find them even when there’s nothing nearby to tip us off to their presence.

Roman’s Galactic Bulge Time Domain Survey will not only advance our understanding of planetary systems – it will also enable a host of other studies that are difficult or impossible to study any other way.