Optical Field Layout and Field of Regard

The Roman field of regard and optical field layout are illustrated below. These figures provide information about the observing zones, and the angles between the detectors and the instruments. 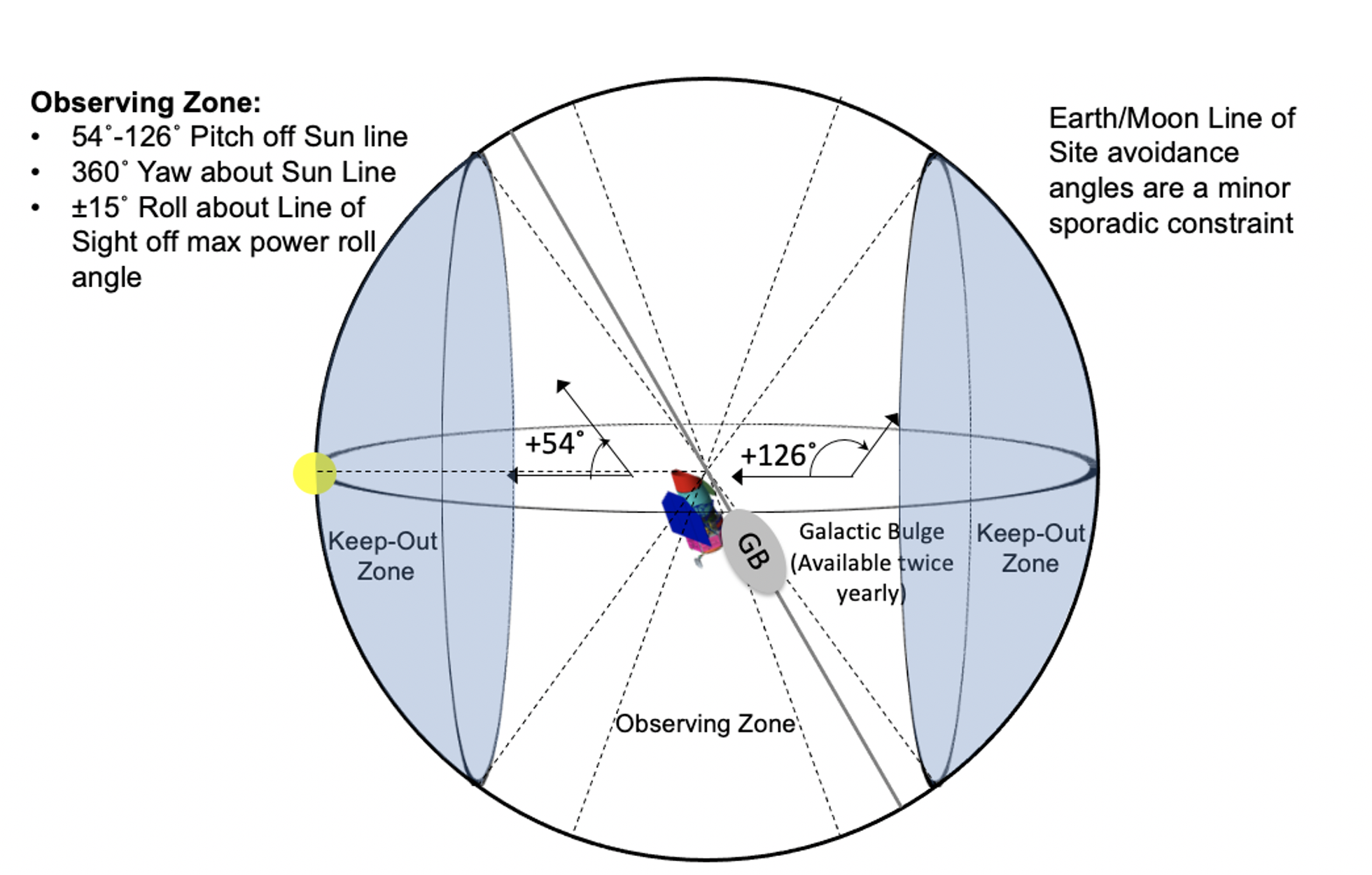 Image of the Roman Field of regard

The Roman Field of regard with the observing zones and keep-out zones highlighted. 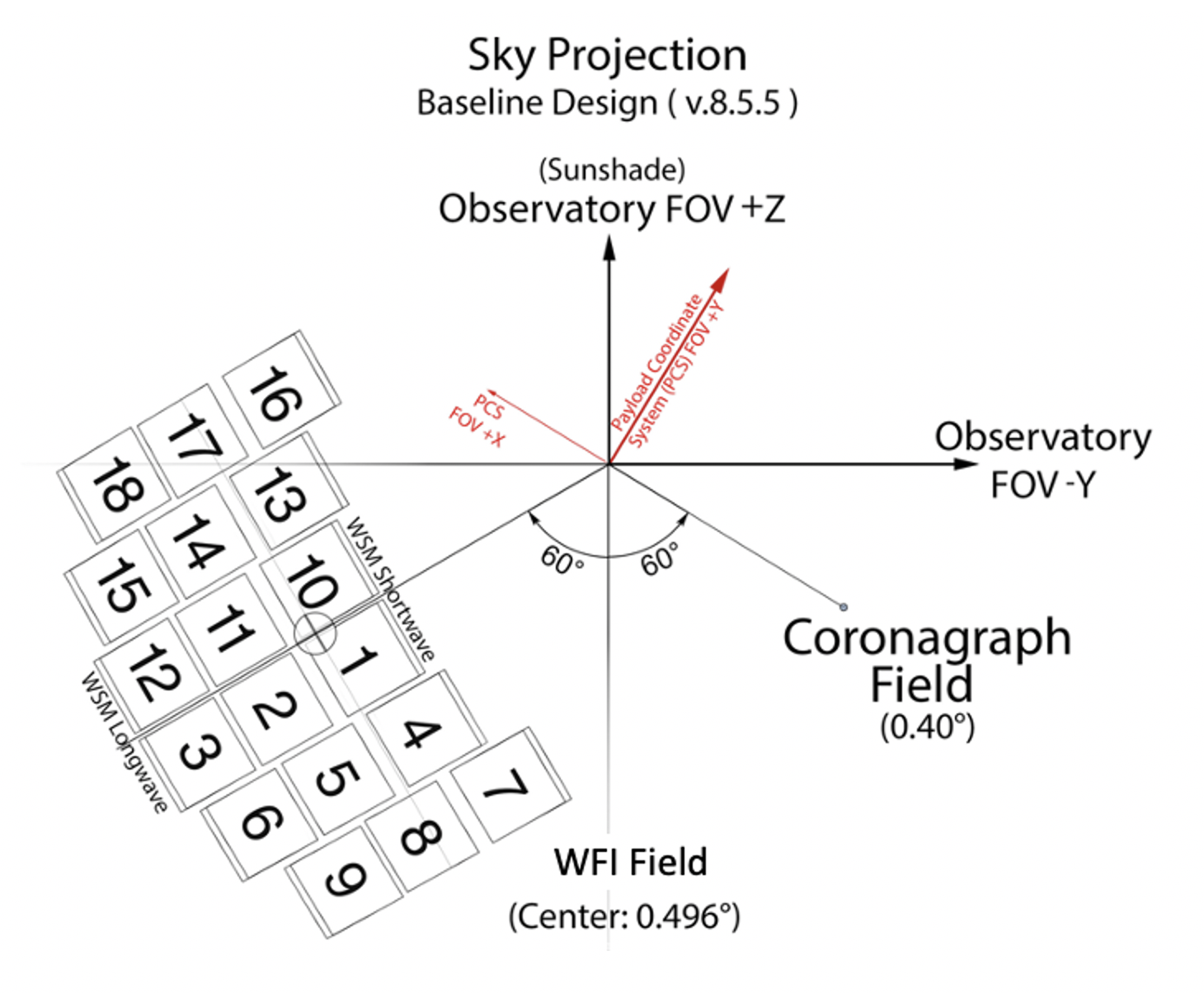 Image of the Optical Field Layout

The Optical Field Layout of the observatory demonstrating the angles between the detectors and the instruments. 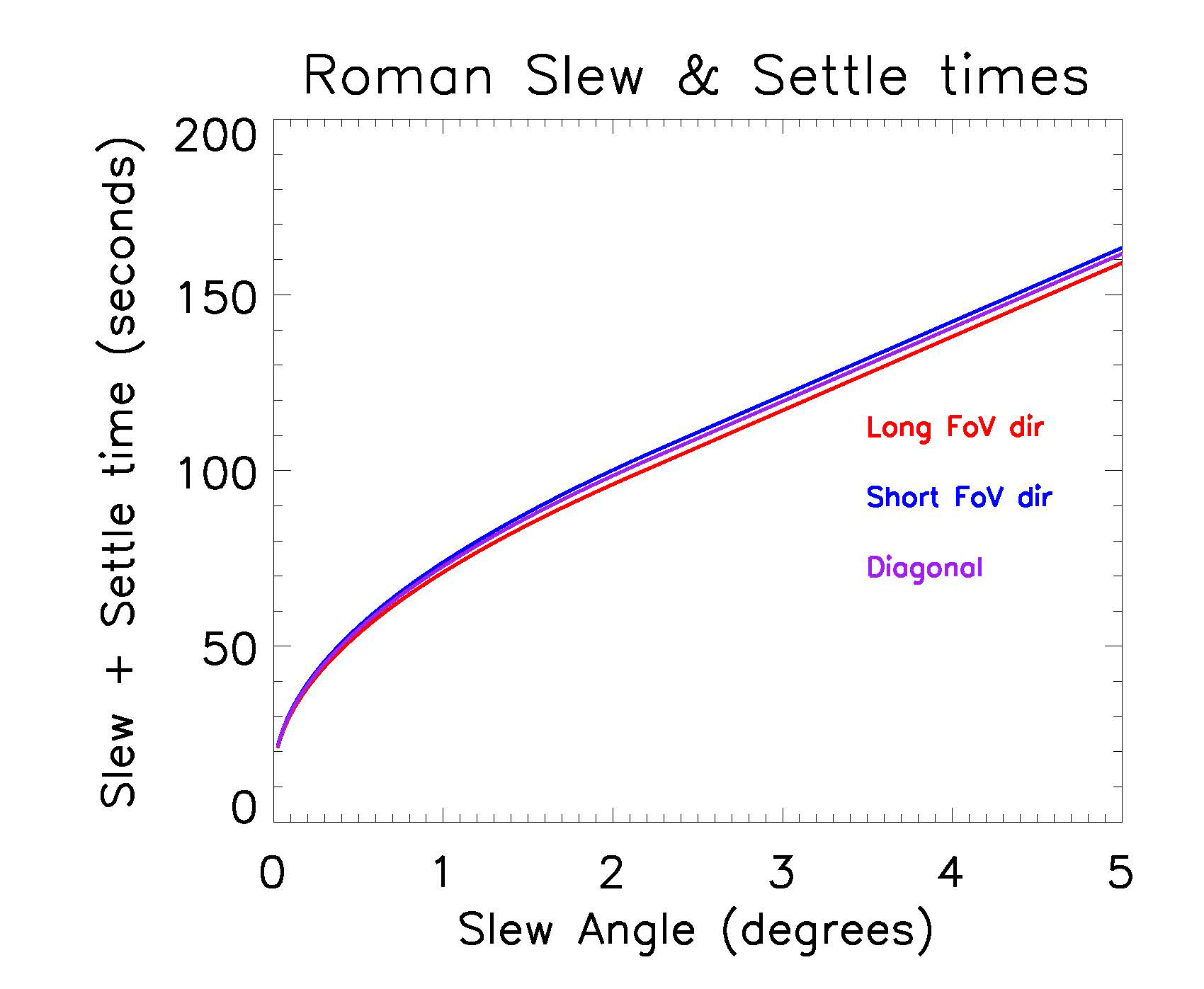 The times for the various telescope slews are presented in the table below.

Note that for smaller slews (e.g., a 5-pixel dither), the time will likely be comprise of the 10 second settle time, plus a few additional seconds. A small pointing offset may be conducted during guiding, but further investigation here is required.

View a more comprehensive list of slew angle and times.

Example visibility plots for two different target declinations are provided below. The Y-axis is the R.A, and the X-axis is the day of the year. The regions in green represent where/when the line of sight is in the Roman field-of-regard.A full set of visibility plots with declination increasing at intervals of 5 degrees is available here.

Image Caption: Visibility plots at Dec. = -30 deg and -65 deg, with regions in green representing where/when the line of sight is in the field-of-regard.

The plot on the left corresponds roughly to the Galactic center if one were to draw a horizontal line at R.A = 266 deg. The spring and fall visibility windows are where that line intersects the green regions.

In the plot on the right, the ecliptic pole is at RA = 90 deg. This means that the bottom half of the plot is in the continuous viewing zone, which is why it is solid green.

The nominal roll angle for an arbitrary R.A and Dec., as a function of time throughout the year has been computed and can be found here. .

This file contains two sets of columns for +/- values of Dec. = 1, 60, and 89 deg. The target R.A was fixed at +90 deg. By focusing on the month and day columns of the file, and the two pitch OK columns, a user may determine which days have the given R.A and Dec. in the field-of-regard. The roll columns give the S/C roll.

For example, if a user were to look at the low declination examples in the file (Dec. = 1 and -1 deg), they would observe that the roll angle doesn’t change much during the good days, because these lines of sight are still not too far from the ecliptic plane. However, if one were to look at the Dec. =-60 deg columns, the roll angle covers all of 0-360 deg. This is due to the fact that with target R.A = 90 deg, the target is in the continuous viewing zone.