Nov 9, 2021 - A team of scientists has forecast the scientific impact of the Nancy Grace Roman Space Telescope’s High Latitude Wide Area Survey on critical questions in cosmology. This observation program will consist of both imaging, which reveals the locations, shapes, sizes, and colors of objects like distant galaxies, and spectroscopy, which involves measuring the intensity of light from those objects at different wavelengths, across the same enormous swath of the universe. 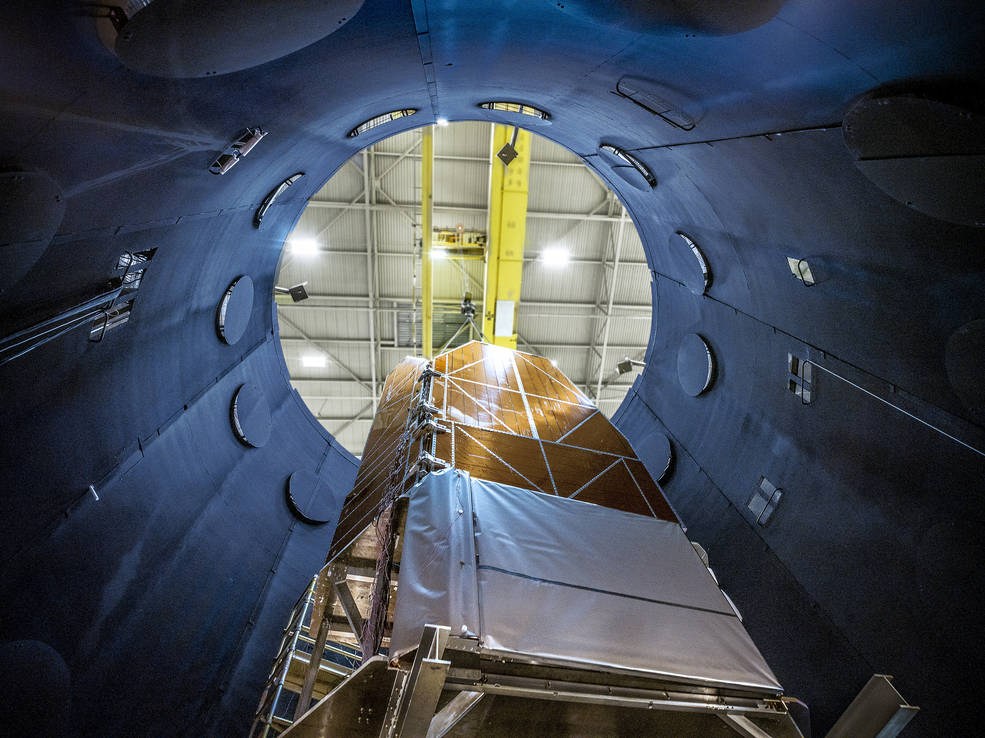 This photo shows the setup for space environment testing of the engineering development unit for Roman’s Solar Array Sun Shield.

Sep 21, 2021 - When NASA’s Nancy Grace Roman Space Telescope launches in the mid-2020s, it will revolutionize astronomy by providing a panoramic field of view at least 100 times greater than Hubble's at similar image sharpness, or resolution. The Roman Space Telescope will survey the sky up to thousands of times faster than can be done with Hubble. This combination of wide field, high resolution, and an efficient survey approach promises new understandings in many areas, particularly in how galaxies form and evolve over cosmic time.

Jul 29, 2021 - Nancy Grace Roman Space Telescope will revolutionize astronomy by building on the science discoveries and technological leaps of the Hubble, Spitzer, and Webb space telescopes. The mission’s wide field of view and superb resolution will enable scientists to conduct sweeping cosmic surveys, yielding a wealth of information about celestial realms from our solar system to the edge of the observable universe.

Jun 9, 2021 - Roman's team recently flight-certified all 24 of the detectors the mission needs. When Roman launches in the mid-2020s, these devices will convert starlight into electrical signals, which will then be decoded into 300-megapixel images of large patches of the sky. These images will allow astronomers to explore a vast array of celestial objects and phenomena, bringing us closer to solving many pressing cosmic mysteries.

May 26, 2021 - Roman’s supernova survey will help clear up clashing measurements of how fast the universe is currently expanding, and even provide a new way to probe the distribution of dark matter, which is detectable only through its gravitational effects. One of the mission’s primary science goals involves using supernovae to help pin down the nature of dark energy – the unexplained cosmic pressure that’s speeding up the expansion of the universe.

Apr 13, 2021 - NASA’s Nancy Grace Roman Space Telescope will provide an unprecedented window into the infrared universe when it launches in the mid-2020s. One of the mission’s planned surveys will use a quirk of gravity to reveal thousands of new planets beyond our solar system.

Mar 31, 2021 - NASA's Nancy Grace Roman Space Telescope will create enormous cosmic panoramas, helping us answer questions about the evolution of our universe. Astronomers also expect the mission to find thousands of planets using two different techniques as it surveys a wide range of stars in the Milky Way.

Mar 3, 2021 - NASA’s Nancy Grace Roman Space Telescope will be able to explore even more cosmic questions, thanks to a new near-infrared filter. The upgrade will allow the observatory to see longer wavelengths of light, opening up exciting new opportunities for discoveries from the edge of our solar system to the farthest reaches of space.

Jan 25, 2021 - When it launches in the mid-2020s, NASA’s Nancy Grace Roman Space Telescope will explore an expansive range of infrared astrophysics topics. One eagerly anticipated survey will use a gravitational effect called microlensing to reveal thousands of worlds that are similar to the planets in our solar system. Now, a new study shows that the same survey will also unveil more extreme planets and planet-like bodies in the heart of the Milky Way galaxy, thanks to their gravitational tug on the stars they orbit.

Jan 11, 2021 - Roman will be able to photograph an area of the sky at least 100 times larger than Hubble with the same crisp sharpness. Among the many observations that will be enabled by this wide view of the cosmos, astronomers are considering the possibility and scientific potential of a Roman Space Telescope "ultra-deep field." Such an observation could reveal new insights into subjects ranging from star formation during the universe’s youth to the way galaxies cluster together in space.