WFIRST has been RENAMED to
The NANCY GRACE ROMAN SPACE TELESCOPE 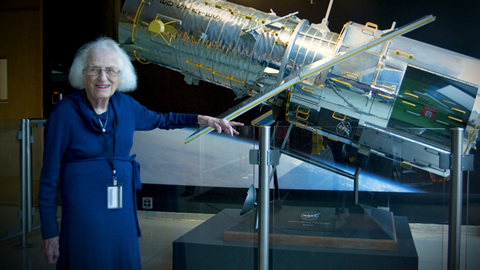 Nancy Grace Roman, standing here in front of a 1/6-scale model of the Hubble Space Telescope at NASA's Goddard Space Flight Center, is known to many as the "Mother of Hubble" for her foundational role in the observatory's planning and program structure, paving the way for missions like the Roman Space Telescope (formerly WFIRST).

WFIRST has been renamed to honor a NASA pioneer, Nancy Grace Roman. Read about her career and contributions to the nations space program.

From a young age, Dr. Roman showed an interest in astronomy, and when she was 11 years old she organized a club with her classmates in Reno, Nevada. In this club they learned about constellations and celestial objects from a book.

By high school, Dr. Roman realized that she had a passion for astronomy and wanted to pursue it. Her academic prowess was highlighted when she participated in an accelerated program and graduated in three years from Baltimore's Western High School.

When asked what she thought was the most interesting discovery by Hubble, her reply was "dark energy"!

In 1946 Dr. Roman received her Bachelor of Arts degree in Astronomy from Swarthmore College in Pennsylvania. During her time there she worked at the Sproul Observatory. In 1949 she received her Ph.D. from the University of Chicago, and stayed at the university for a further six years working at the Yerkes Observatory, and sometimes the McDonald Observatory in Texas. During this period, she observed the star AG Draconis and discovered that its emission spectrum had completely changed in comparison to earlier observations. This discovery helped to raise her profile within the astronomical community.

As a female in astronomy, Roman faced many challenges throughout her career. From a young age she was discouraged from going into astronomy by those around her, and while in the field struggled with its male dominance and the roles perceived as appropriate for women. During her time at the University of Chicago it became evident that due to her gender she would not obtain tenure, and as such she left.

After leaving the University of Chicago she went to work at the Naval Research Laboratory (NRL) from 1955-1959, and entered into the new field of radio astronomy. During her time at NRL she used non-thermal radio source spectra and conducted geodetic work. Within this program she became the head of the microwave spectroscopy section. Her experiences at NRL helped her adapt to an engineering environment, which became essential in her future career. 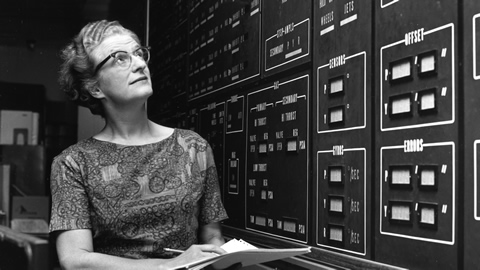 Nancy Grace Roman, shown here at NASA's Goddard Space Flight Center in approximately 1972, was the first female executive and the first Chief of Astronomy at NASA.

Part of Dr. Roman's job included the planning of a program of satellites and rockets. She also administered a significant program of grants to support the astronomical community. One of the biggest challenges of her career was getting the Hubble Space Telescope approved by the U.S. Congress. It is through her work with this mission that she was coined "the mother of Hubble" by her colleagues, specifically by Edward J. Weiler, her successor at NASA as Chief of Astronomy following her retirement in 1979.

When asked what she thought was the most interesting discovery by Hubble, her reply was "dark energy"! Hubble confirmed the astounding initial measurements that the expansion of the universe was accelerating, and extended those measurements to higher redshifts. These discoveries excited Dr. Roman, as well as the astronomical community. It is therefore with great pleasure that we dedicate NASA's next major space observatory, previously known as WFIRST and tasked with increasing our understanding of dark energy, the Universe, and our place in it, to Dr. Nancy Grace Roman, the pioneer of modern space-based astronomy who made such telescopes a reality.